The first private distilling plant in Ukraine. How Nemyriv Operating Location and Spirit Storage was privatized 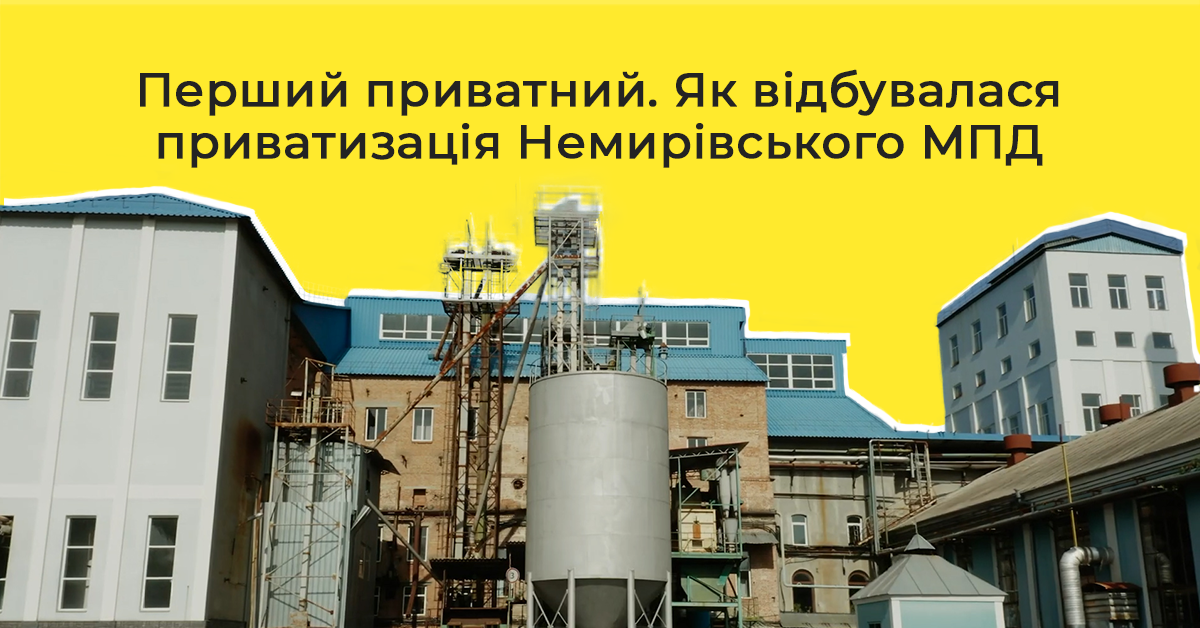 On September, 2020, the first in the new history of Ukraine it was held sale of the state spirit asset. The new owner of the first private operating location and spirit storage became LVN Limited LLC (TM Nemiroff) that raised the starting price at the e-auction from UAH 49.6 million to UAH 55 million. On November, 12, the sale agreement of the asset was signed.

Nemyriv Operating Location and Spirit Storage was the first that has been put up for privatization, becoming “the pioneer” in the real historic event – saying good-bye to the state monopoly in the spirit production industry. Yuriy Sorochynskyi, the General Director of LVN Limited LLC tells why he risked participating in the spirit privatization.

– How did you know about spirit industry privatization?

– We were among those who initiated the privatization of the spirit industry for a long time. Monopoly did not give anything: neither the ability to develop, nor the ability to use modern technologies. In fact, Ukraine, which in the early 90’s of the last century was one of the largest producers of alcohol, lost all markets – thanks to such a state policy of monopolization, closing borders, banning the export of Ukrainian alcohol.

Conversations about the need to privatize the industry began a few years ago. All industry participants understood that the state monopoly significantly hinders the development of the industry. The quality of the product, production technology and price left much to be desired and put us far behind Western competitors and international standards. Equally important – monopoly gave space for the development of shadow business. Therefore, privatization was a logical step and the only possible solution to make a difference in the industry.

This issue has been repeatedly raised both in the Government and in the relevant Committees of the Parliament. We are interested in the industry development properly. Therefore, when the relevant laws were adopted, we constantly monitored the situation, saw that the process finally started – after probably 25 years of resistance.

As one of the largest consumers of alcohol in Ukraine, we associated the joint working group at the level of “Ukrspyrt” in order to make an inventory of all places of activity. It was a pleasant surprise for us that it was Nemyriv distillery asset to be auctioned first.

– Where did you get information about lots, e-auction?

Within the framework of inventory, our specialists traveled almost all distilleries of Ukraine. We understood their technical condition, status. From all that variety of places of activity, we stopped at the Nemyriv one and, in principle, we expect a lot of this.

– Why did you decide to participate immediately in the first e-auction? What argument was decisive?

– We have chosen Nemyriv Operating Location and Spirit Storage for several reasons, and they are closely related. First of all, it is a convenient geographical location, as the asset is a few hundred meters from the Nemiroff Plant. This gives the advantages regarding the logistics of one of the key ingredients – alcohol. Moreover, back in the 90’s, when our company started its activity, the Nemyriv object of the SE “Ukrspyrt” was the first and for a long time our only supplier of alcohol. Actually, the company’s activity began with the fact that opposite to Nemyriv Operating Location and Spirit Storage was built a small plant for the production of alcoholic beverages, one of the first enterprises in Ukraine, which received a state license for the production of alcoholic beverages.

The ability to control quality at all stages of production is a long-standing goal of the company. Unfortunately, it was impossible for the monopoly, but we believed that over time the situation would change and buying or creating our own plant would be a logical step for this.

It is equally important that with this purchase we restore the brand’s heritage, its historical roots. After all, the first mention of the Nemyriv Brewery has reached the 18th century, even then the production capacity was about 5 000 bottles per day. Vodka from Nemyriv in the late XIX century was famous for its high quality and served to the king’s table, and exported to other countries. Therefore, we are proud to be able to contribute to the integrity of the brand and restore its glorious heritage.

– How do you evaluate the possibility of access to the necessary information at the stage of deciding to participate in the e-auction? Were there any surprises in preparation for the e-auction, collection of documents?

– How do you generally assess the condition of the acquired asset?

– Nemyriv alcohol asset in terms of capacity is one of the largest in Ukraine, but it has not worked in full since 2010. As far as we know, the last small batch of alcohol was produced 5 years ago. At one time he was “donated”, stopping production and leaving only a few people for maintenance to enable 15 other, smaller, distilleries in Ukraine to work.

Of course, to fully start the work we will need to carry out some restoration work. After signing the contract and gaining access to the territory of the object, we will be able to more accurately assess its condition, technical and material base, to draw certain conclusions.

– How do you see the place of Nemyriv Operating Location and Spirit Storage in the company structure? How do you plan to use it?

– First of all, the priority will be to meet the own needs and needs of the domestic market. Nemiroff is one of the key vodka producers in the country and an active exporter. The company grows and enters new markets, so it requires a significant amount of raw materials.

No less important is the issue of the quality of alcohol, because monopoly this was given a minimum of value and the level of quality did not meet the demands of export needs. After privatization, Nemiroff’s task will be to raise the quality of alcohol to a new level that meets Western standards. If excess production capacities are detected, we will start work on finding additional markets.

– How will this acquisition affect the development of your business as a whole? How do you assess the production, financial, marketing effect?

– With this purchase, we are restoring the historical heritage of the brand, which, according to archival data, dates back to 1752. Nemyriv produced vodka almost 100 years before Mendeleev defended his thesis “On combining alcohol with water”.

Nemiroff carefully approaches both the technological process and the selection of ingredients. With the acquisition of the distillery, the company’s priorities will be the gradual introduction of modern technologies in production to increase the efficiency and improve the quality of alcohol.

It is too early to talk about the financial effect, since the launch of production, in addition to buying an asset, will require significant investments. However, we are ready for this and are confident that all participants will win – both the company and consumers who will receive better products and the state, which will have additional revenues to the budget in the form of taxes.

– Has there already been an acquaintance with the top management of the enterprise, staff? Do you plan to carry out a personnel restructuring and if so, how do you see it?

– According to the terms of privatization, it is obligatory to save at least 70% of existing jobs. We will fulfil these conditions. Since the asset did not work, currently only about 40 people were engaged in its maintenance. We have known all the employees of this Operating Location and Spirit Storage for a long time. Of course, after the completion of all preparatory work and obtaining a license, an additional recruit staff will be announced.

Nemiroff plans to train and improve staff skills. We will have quite a long time to work with the employees of Nemyriv Operating Location and Spirit Storage in order to change and improve their skills. We know how to do it, so it’s not a problem.

– How long, according to your calculations, is it necessary to reissue the asset and launch it under your management?

– Depending on how quickly the new licensing law will be adopted and implemented, as well as the assistance of government agencies in obtaining a license. According to our estimates, it will take at least two months. Therefore, we plan to launch production for the 1st quarter of 2021.

– How much do you plan to invest in the asset to make this possible?

– According to preliminary calculations, the first investment will be from 300 to 500 thousand dollars. This is an initial investment in order to bring production to a more acceptable state for us. It is important for us that this alcohol is to be of stable high quality with no quality changes. Therefore, there will be investments in equipment, technology and staff.

– Do you plan to buy another alcohol asset?

– No, we do not plan. In fact, today the nominal capacity of the Nemyriv distillery is enough to meet all our needs. But when we reach nominal capacity, we will have a small surplus of alcohol, which we will be able to sell to other consumers in Ukraine, or organize additional production.

04.08.2020
Leave a Comment
An unfinished complex of buildings and constructions that was on a balance of Odesa Regional Job Center was abandoned due to lack of resources to complete construction. However, in early December 2019, it was carried out a transparent auction on.
Read more

31.07.2020
Leave a Comment
Two years ago Kharkiv “AutoEnterprise” acquired 99.99% of shares of PJSC “Research and Production enterprise “Systema”. The investor got ruins of the building, where in Soviet times thousands of TV sets “Berizka” and “Oskar” were monthly made. Together with.
Read more